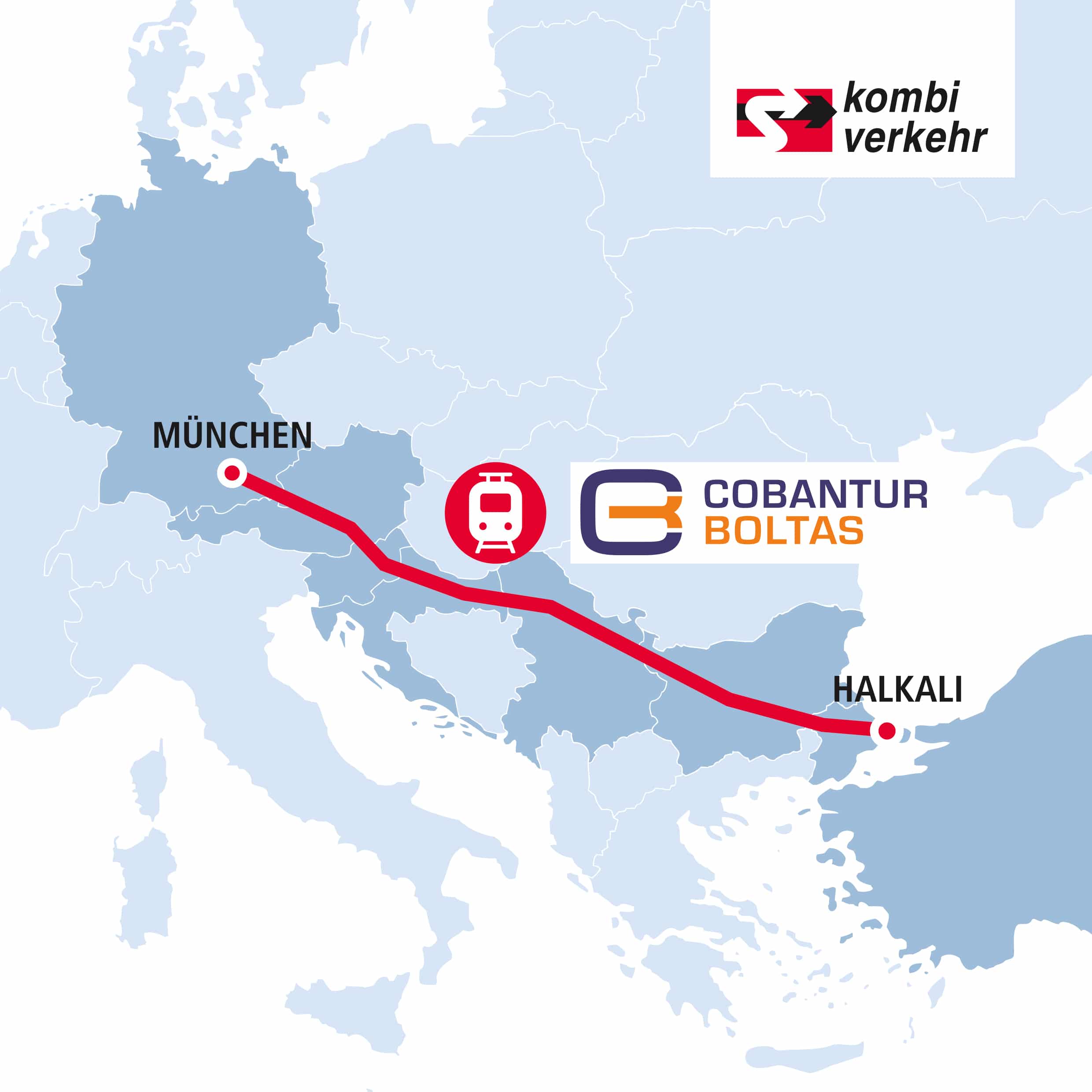 With its new own direct connection for rail transports between Germany and Turkey our customer sets course for more sustainability!

A Company Intermodal train managed by the Deutsche Gesellschaft für kombinierten Güterverkehr mbH & Co. KG
(Kombiverkehr) started its first journey from Munich to Halkali in Turkey on 21 January on behalf of the freight forwarding company. The train will initially run once a week in both directions. The second round trip is already
in preparation.

The train will cover a distance of around 2,000 kilometres each way and cross six national borders – without having to reload the transport containers. Another advantage: compared to continuous road freight transport, the new Company Intermodal train saves almost 80 tonnes of CO2 in the round trip, which corresponds to a 70 percent reduction
in emissions.

“We have been combining the train connection across the Alps with the ferry in Trieste on the Turkey-Bavaria route and back for years – and will continue to do so,” says Iskender Cobanoglu, Managing Director at Boltas – the German part of the logistics group. The new Company Intermodal train complements this offer: customers of the COBANTUR
BOLTAS Group can now choose which of the two transport routes is better for them. Depending on the destination in Turkey, the transit time or, for example, the transport of special hazardous goods, the overland route, which is handled 100 per cent by rail, may then be the more suitable solution. “In this way, we are sending a clear signal in favour of rail, decoupling ourselves a good deal from the shortage of truck drivers and are even more climate-friendly,” says Cobanoglu.

COBANTUR BOLTAS got the intermodal train rolling with the help of Kombiverkehr KG. Both companies have been working together successfully for years – and have now put a company goods train on the rails for COBANTUR BOLTAS for the first time. “To make this challenging project possible, we conducted intensive negotiations with tractionaries,
terminals and authorities,” says Alexander Ochs, Managing Director of the Frankfurt based operator. “So it is all the more gratifying that today, here at the DUSS terminal in Munich-Riem, together with our customer and also in the presence of the Bavarian State Ministry of Housing, Construction and Transport, we are sending the first train on its
journey.” Kombiverkehr takes care of the rental of wagons and replacement wagons, terminal services, round-the-clock train monitoring and order management. “An efficient complete package,” says Ochs. Traction on the through route is provided by DB Cargo AG on behalf of Kombiverkehr.